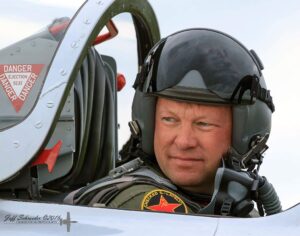 Randy W. Ball  is North America’s PREMIER Jet Demonstration Pilot. Randy has performed well over 1,400 performances to date! No other North American Jet Demo pilot even comes close to that number of performances. In fact, Randy is the ONLY Jet Demo pilot (military or civilian) to be granted both a day and night unlimited aerobatic rating in jet fighters by the FAA. He has flown over 44 different types of aircraft, manufactured in 9 different countries.

As a youngster Randy’s father took him flying occasionally, and he spent countless hours with one of his heroes, his Great Uncle Gilbert Ball, who flew 51 missions over Europe flying the B-17 Flying Fortress. Even before college, Randy knew he wanted to fly. By the time he was 13 years old, he had already taken off and landed a plane with his father and soloed at the age of 18. Randy volunteered to work in his first air show in 1982 and flew in his first air show more than 30 years ago. He now performs throughout North America, from Canada to Mexico.

Randy has flown as the enemy aircraft with the USAF F-4 both for air shows and on film. His solo demo is designed to resemble the tactical demo of the F-16 Falcon, the first fighter that could out-turn the Vietnam era MiG-17. During his demo in the MiG-17F, he routinely pulls 8gs, and reaches speeds approaching 700 mph, all while sometimes flying less than 100 feet off the ground.

He likes to spend time with Civil Air Patrol Cadets and the Boy Scouts, and when asked what is his favorite maneuver, he says “the vertical A/B roll”. When asked what his favorite air show is, he says “It’s the one where I can have access to the fans, especially the kids. It is the kids who make all the work worth it. They are the next generation, and the one hope I have is to inspire them in a positive way…to fly.”